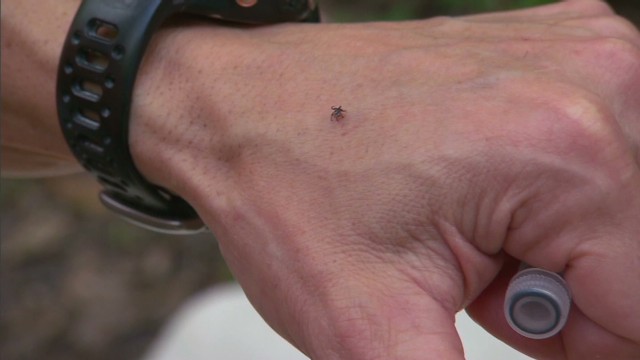 Lyme disease is the most common disease caused by ticks in the United States, and with the climate crisis it may become even more common.

When you get bit by a tick, you will typically see a small red bump that may look like a mosquito bite. But three to 30 days later, if a rash shows up and expands from that red area and looks a little like a bull’s-eye, that’s a sign you may have Lyme disease.

Doctors will call this rash erythema migrans. Often it will expand slowly. It’s not normally itchy or painful, but the area may feel a little warm when you touch it.

Between 70% and 80% of people with Lyme disease develop this rash, and some patients develop it at more than one location on their bodies.

Left untreated, the infection can spread to the joints, heart and nervous system, according to the Centers for Disease Control and Prevention. This can lead to joint pain and swelling.

After several weeks to months, patients may also experience swelling of the membranes surrounding the brain, temporary paralysis of one side of the face and “brain fog”: forgetfulness or confusion.

How you get Lyme disease

Lyme disease comes from four main species of bacteria. In the US it’s Borrelia burgdorferi and Borrelia mayonii that cause the disease, according to the Mayo Clinic.

An infected tick transfers the bacteria when it bites. There are several kinds of ticks in the US that carry the bacteria that causes Lyme disease, including blacklegged ticks, also known as deer ticks.

Most people get sick with Lyme disease in the spring and summer months. That’s when the immature ticks called nymphs are most actively feeding and that’s also when most people are out and about, walking through grass and the heavily wooded areas where the bugs like to hang out.

What to do if you get bitten

Ticks can be tiny: Deer ticks may be as small as the head of a pin, so look for them carefully.

Removing a tick within 24 hours cuts your risk of developing Lyme disease because it takes time for the bacteria to move from the tick to the host. The longer the tick is attached to the body, the more likely that person will be infected. Use tweezers to carefully and steadily pull the tick off, grasping near its mouth or neck. Then put antiseptic on the infected area.

In most cases, a tick must be attached to your skin for 36 to 48 hours.

If you’ve been bitten and develop symptoms, call your doctor immediately. Even if your symptoms disappear, you should still see a doctor.

The standard treatment for Lyme disease in early stages is oral antibiotics. Usually, a 14- to 21-day course is recommended, but some studies suggest that a 10- to 14-day course is equally effective, according to the Mayo Clinic.

If the central nervous system has been affected by the disease, intravenous antibiotics may be given for 14 to 28 days. This treatment eliminates the infection, but you may need more time to recover from symptoms. The side effects from this treatment may include a lower white blood cell count, diarrhea or infection with other organisms resistant to antibiotics that are unrelated to Lyme disease.

People who are put on antibiotics early in the disease generally make a full recovery, according to the Mayo Clinic. It may take patients who get treated later in the infection longer to respond to treatment.

Most people, regardless of when they get help, recover completely, but about 20% experience persistent symptoms and some can be disabling.

You can prevent Lyme disease.

The CDC recommends wearing insect repellent with at least a 20% DEET concentration and avoiding wooded areas with high grass, where ticks are most often found.

Check for ticks daily and, if you spend a lot of time outdoors, take frequent showers. A washcloth can help remove unattached ticks.

When you are outside, cover up. Wear long sleeves, long pants and hats when walking or hiking in the woods.

Your dogs and cats can also bring the pests inside, so check them and tick-proof your yard. Clear out the leaves and brush where ticks like to hide. Keep your lawn mowed.

How common is it

Each year, state health departments send reports of about 30,000 cases to the CDC, which tracks the disease. The problem is likely much worse.

With the climate crisis bringing warmer temperatures and conditions, more people will likely get sick. The bugs love this kind of climate and scientists predict areas of the country that hadn’t been home to the ticks, will see new tick colonies.

It’s something members of Congress have called “a serious and growing threat to public health.” Already, the number of Lyme disease cases have doubled since 2004, according to a 2018 report to Congress.

Nigerian newspapers: 10 things you need to know this Monday morning

You Have Been Accepted By Rich Single Mom Rebecca

Sugar Girl Lila Is Online And Waiting For Your Response

Cardi B reacts to allegations of snubbing Ghanaian celebrities [VIDEO]