Tens of thousands of anti-government protesters took to the streets of Hong Kong on New Year’s Day, but the march was later called off after police said bricks and petrol bombs had been thrown.

Police used tear gas briefly Wednesday during confrontations with protesters, after what had begun as a largely peaceful event.
They said “thugs” had thrown bricks and petrol bombs, set fires, and damaged banks and shops during the demonstration. 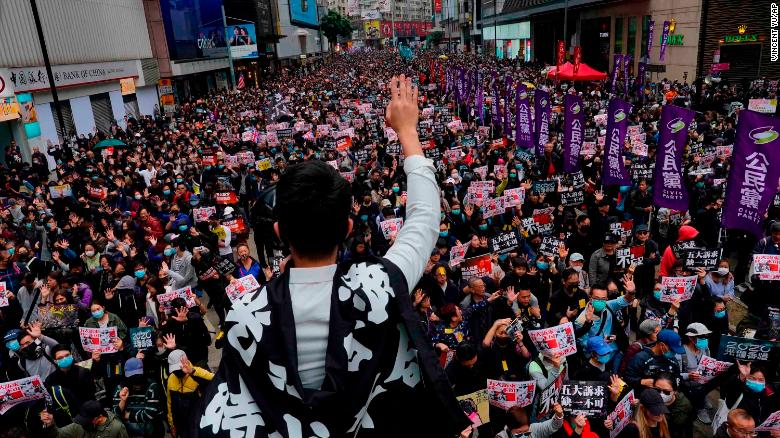 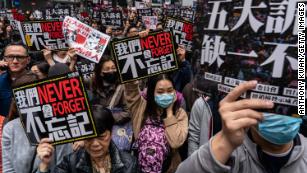 Pro-democracy supporters hold placards during a New Years Day rally.
Despite calls from the event organizers to leave the area, thousands of protesters remained on the streets on Wednesday evening.
Event organizers said over a million people had taken part in the march. The police estimate was significantly lower, with authorities suggesting 60,560 people had participated, and that just 13,000 of those remained inside Victoria Park on Wednesday evening.
Activists of all ages began gathering in Causeway Bay on Hong Kong Island on Wednesday afternoon local time, with some waving flags that read “Hong Kong independence.”
Others donned masks of Pepe the Frog, an internet meme that has been adopted as one of the symbols of the city’s long-running protest movement.

There have been more than 1,000 demonstrations in Hong Kong since June, ranging from small rallies of a few hundred people to large-scale marches with estimates of up to 2 million attendees.
Sparked by a now-withdrawn bill that would have allowed fugitives to be extradited to mainland China, the movement has expanded to include more demands, including an investigation into allegations of police brutality and greater democratic rights in the semi-autonomous territory.
More than 6,000 people have been arrested since the protests started, with over 2,600 hospitalized. Police have fired 16,000 rounds of tear gas during the unrest, while violent protesters have thrown bricks, fire bombs and even an arrow at officers.
Wednesday’s rally was organized by Civil Human Rights Front (CHRF), the group behind some of the movement’s biggest marches. Spokesman Jimmy Sham earlier said he hoped it would be peaceful.
In November, protesters turned some university campuses into fortresses, stockpiling them with weapons and food. Since then, there’s been a lull in large and violent protests, although demonstrations have continued.
On Christmas Eve and Christmas Day, hundreds of black-clad protesters — many wearing reindeer antlers — occupied malls and other shopping areas.
On New Year’s Eve, protesters gathered around Hong Kong, resulting in clashes with police.
Although protesters have been demonstrating for almost seven months, marchers on Wednesday emphasized the need to continue.
“Our children are out there protesting, we worry every time that they will be arrested but we fully support them,” said a 62-year-old man, who asked not to be named out of privacy concerns. “Hong Kong people need to persist.”
Read More :  COVID-19: FG explains delay in reopening schools

More from my site

You Have Been Accepted By Rich Single Mom Rebecca

Sugar Girl Lila Is Online And Waiting For Your Response

Cardi B reacts to allegations of snubbing Ghanaian celebrities [VIDEO]